It occurs, with who-knows-who turning their attention to and getting their mitts on the current Missal and its translation, I know he's an Extraordinay Form guy, but perhaps Mosebach would consider a sequel to Heresy of Formlessness?

Or even a contemporary papal history, The Papacy of Formlessness?

Labels: Bishops with chests, Francis Effect, Is the Pope Catholic

Which One of These Has Earned Prelatial or Episcopal Opprobrium?

You know, I mean.... for his sartorial choices?
Which one do you think, say, a pope even might weigh in on?
Go ahead, take your time.
I'll wait. Trying Not To Play "Gotcha!" With the Holy Father

Pope Francis, not sure why, brings out the worst in me.

I know, I already KNOW, headlines are like as not completely deceptive, sometimes flat contradicted by the facts as presented in the article that follows. (Not as big a problem in middle-of-the-road Catholic news outlets, but still...)
And I'm not taking all the blame for this, I think it is a matter of sad confluence that we have at this time a president who thinks in tweets and and a pope who preaches in sound bytes.
Governing well may take more than 140 characters, the Holy Spirit probably doesn't sound like a Hallmark card.
So I see, "Trusting in God means letting go of what we want, Pope says,"and my first thought is, Oh, really? than why do you seem to be getting all bent out of shape when thwarted by Synods, Knights, and Catholics who feel a connection with previous centuries of Catholicism?
And now on top of this, I'm wondering, why is it all right to say, “this is my opinion: women are more courageous than men.”
Are positive generalizations not just as sexist/racist/whateverist as negative ones?
You might, in this PC world, barely get away with, “this is my opinion: men are less courageous than women,” just barely, but there'd be some sniffing, although it means more of less the same thing.
But yeah, you'd get away with it.
Because. Privilege.
But could you imagine the outcry if instead, “this is my opinion: women are less courageous than men.”
He might find himself in Origen's shoes. Or other item of clothing.
Oh, and I also know the Law of Projection, by which we are all to be judged in the 21st century, so if this bother me, clearly it is because if it is a fault it is one of which I myself am most grievously guilty.
So, I see an apt Lenten penance suggesting itself, weeks early....
Posted by Scelata at 12:48 No comments:

Labels: Francis Effect, Life as we know it, Popin' ain't easy, Sins and Virtues, the Interwebs

By which I mean, to feel cozy at the prospect of the mercury dipping below 70°.

But even so, sipping mulled wine and gazing happily at our Don't-You-Dare-Take-It-Down-Before-February-2 Tree feels like Yules of Yore, (meaning, not of my Youth, but of Years Yet... oh, shut up.)

But I do like spiced wine and I do like the glittering bead garlands of the tree and I do like the over-populated creche scene, (a heathen in-law looked at it and said, wow, that supposed to be Jerusalem or the east Village, or what...? Magnanimous at this festive time, I forgive him and pity him his ignorance.)

Not much time left to savor the victual delights of the season.
One last bit of "fancy" cheese - is there much tastier than Sartori's Bellavitano? I should like to know about it if there is!
Thank God for Aldi, it's the only way I'd ever have such a treat in my house, (we were almost banned from Whole Foods after Himself consumed pretty much the entire contents of a "dome" of samples once. I was made very aware of the... frugality? of my holiday larder by the aforementioned in-law. The prospect of Himself losing insurance coverage will no doubt preclude us ever again entertaining the guy in a manner he finds acceptable - if that isn't the very definition of Silver Linings I don't know what is!)

My Mother... she may have been the only person I know who also enjoyed mulled wine. And she liked cheeses as much as I. Her last Christmas is a memory that will continue to haunt and delight me.
"Lo, how a..."
Posted by Scelata at 18:33 No comments:

I imagine everybody could use a laugh right about now, even if it's a mirthless one.
The choice of some putters of notes and words on paper in a manner that those putters (and presumably their editors, [though it should be said that they themselves often are on the editorial boards which deem their putting of notes and words worthy,] and publishers,) believe to be suitable for use in Liturgy as recipients of an award was met with some amusement, some ridicule and some outrage on the Book of Faces.
One of those outraged linked to his blog
He linked to a post I would have thought Eye of the Tiber material, the gist of which was this award recipient's veneration (in the religious sense,) of a tragically, and senselessly murdered gay man, who seems to have been a generally nice guy all of whose stances were politically correct.

And IT links to... well, it turns out their is a dealer in "religious" goods who actually sells this "icon."
The artist, allegedly a Franciscan brother, gives halos to a remarkable range of... persons, and also includes many actual saints and blesseds. (Also, some truly lovely and holy depictions of our Blessed Mother, and of Christ Himself with characteristics and coloring of ethnic minorities.) Einstein with a halo. Ss Pepertua and Felicity posed for a Benettons ad. Merlin, (yes, THAT merlin.)
And the Aboriginal American cross-dresser, We'wha, (I believe that is also the spelling for the way they young folks nowadays pronounce, pitch and inflect, "Wait... whaaat?"

The Woman Taken in An Other-Than-First Marriage

"This woman was caught in the very act of committing adultery. Now in the law, Moses commanded us to stone such women. So what do you say?”
They said this to test him, so that they could have some charge to bring against him.
Jesus asked, "So, is this a formal dubium?"
And they answered,"Well, uhm... I dunno... so what if it is?"
And He spoke, "Then I might not answer you. So.... in what diocese do you live?"
And one said, "Uhm.... Malta?"
But yet another declared, "I'm from Philly."
And they were sore confused.
But when they continued asking him, he straightened up and said to them, “Let the one among you who is without sin be the first to throw a stone at her.”
Again he bent down and wrote on the ground.
And in response, they went away one by one, beginning with the elders. So he was left alone with the woman before him.
Then Jesus straightened up and said to her, “Woman, where are they? Has no one condemned you?”
She replied, “No one, sir.”
Then Jesus said, "Are you at peace with God?"
The woman replied, "Yeah, I guess so..."
“Neither do I condemn you. Go, from now on try to make it work with your current partner, okay?” 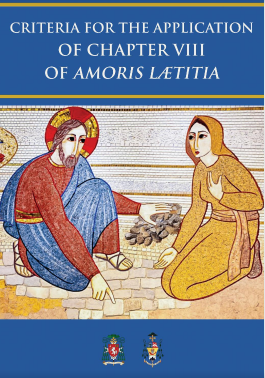 Watching "Night Manager" Pick Up Some Golden Globes, I Thought About How A Crux Columnist Might Apply Amoris Laetitia in THIS Hard Case

Wonder what kind of spiritual direction is available in Mallorca...
Jed, of course, is as fictional as Irma, and the man with whom she is living in sin isn't warm and cuddly like Tony.
But when you think about it, breaking off sexual relations with her guy would have more immediate, more dire consequence, so really...

I don't care what the US liturgical calendar says....

...a Blessed Epiphany!
(And I feast on this Friday...black forest ham, Mancahgocidre, fruitcake and eclairs)