"So ask YOUR doctor is cyanide is right for YOU!"

Outlandish science fiction about a dystopian future.....
BECAUSE,  WHY  WAIT  FOR  THE  FUTURE?????
Maybe they could get Michael Caine to do the adverts - get a bunch of happy old people sitting around enjoying life, er.... I mean, enjoying death.
It'll save the insurance companies crazy money.

You've reached the age when giving up is exactly who you are, this is the age of knowing how to make things stop happening. So why let the preciousness and dignity of life or morality get in the way? Talk to your doctor about Offex. (And talk to your parents' doctors, while you'r at it - it's the loving and fiscally responsible thing to do.)

Should I copyright that drug name? It seems right for an assisted suicide pill, and it's got an "x" in it.
But perhaps "Assisteeze" would be better, "z" is a kewl letter too.

(They'll need a catchy jingle like the one for pills for erectile dysfunction)
Posted by Scelata at 08:14 No comments:

Labels: End of Civilization As We Know It, Life Issues, movies

Harpies Attacking Holy Place, a Shepherd Shirks His Duty, and the Demonic Offers More Proof of Its Existence.

You see, this "MUA" atrocity happens every year in some lucky Argentinian city.
According to police reports, the "National Women's March"...

...attempted to burn down the Cathedral Basilica Shrine of Our Lady of the Rosary in the city of Rosario...The attack was planned for the night of Sunday 9th September during the 31st National Women's march attended by 70,000 women. Maximiliano Pullaro, the Minister of Security for Santa Fe, acknowledged that if police had not intervened with tear gas and rubber bullets the protesters would have burnt down the cathedral with eight firebombs.
In previous weeks pro-abortionists had used social media to incite protesters to burn down the cathedral. In response to this, the group Argentina Alert circulated a petition calling on the authorities and police to protect the cathedral, collecting over 13,500 signatures. A barrier was erected around part of the cathedral in an attempt to protect it from arson.
In recent years the National Women's March has been the occasion for violent and blasphemous attacks against the cathedrals in which the protests have been held. In 2013 1500 young Catholic heroes formed a human shield to protect the Cathedral of San Juan Bautista

But this year, there was a special twist.
The police intervened! (Hard to fathom, but they don't, always.)


During Saturday afternoon semi-naked women danced around an effigy of Pope Francis chanting slogans demanding the legalisation of abortion... [the mob] made a determined attempt to burn down the cathedral with a group tearing down the protective barrier in order to enter the cathedral. A squad of police emerged from inside the cathedral to push back the attackers with their shields. The feminists attacked the police with stones, bottles and iron bars, injuring some of the police. One was injured by a gunshot and another policeman was burnt by a Molotov bomb thrown by an abortionist. The battle to protect the cathedral from being firebombed by the protesters lasted 30 minutes.

Sadly, there was another surprising feature of the Rosario event


The Archbishop of Rosario, Eduardo Martin, did not support the action taken by the young men to defend the cathedral by praying the rosary and putting themselves in harms way. Archbishop Martin went so far as to describe them as "ultras" whose presence provoked the women.

Watch the video linked on the EWTN site to see on which side the blame for "provocation" lies.
I weep, every year, in gratitude to, and pride in, the men, and this year some young women, who pray and protect the churches.
And I weep, for shame that other members of my sex would behave so shamefully, and I weep in utter in mortification that a member of the Catholic hierarchy could be so spineless, and could be so cruel as to criticize those laypersons who were DOING  HIS  JOB.

I wouldn't depend on that shepherd to lay down his life for his sheep....

Labels: Bishops with or without chests, Life Issues, The world will hate you

This strikes me as spin. Trying to spin gold out of not dross, but BS.
Emails out of context, fine.
Larger point, fine.
Rupert Murdoch's a bad guy, fine.
Explain this phrase, fine.

This is so typical of what's put out there by the conglomerate of agenda-driven media and political hack spin-meisters, lots of words explaining away everything EXCEPT  WHAT  PEOPLE  ARE  REALLY  OFFENDED  BY.


“It’s an amazing bastardisation of the faith."

Maybe it is. I don't know Murdoch, I don't know what he believes. He strikes me as an insincere opportunist, but he didn't convert, he merely allowed his children to be perhaps raised in the Faith, so he can't be all THAT attracted to it....


"They must be attracted to the systematic thought"

See above. (Though it must be asked at this point, is there something attractive about unsystematic thought that I'm missing, which makes attraction to the systematic objectionable?)


"and severely backwards gender relations and must be totally unaware of Christian democracy.”

Okay, there we are.
Can a reference to the Church's Severely. Backward. Gender Relations. when expressed by an activist for a political movement that seeks to, (and so far has been pretty damned successful at it,) redefine marriage, masculinity and femininity ever really be "simply a fleeting reaction from within the Catholic tradition to something [he] read"?

This is so common from both sides - someone says, or does something awful, someone else expresses outrage, first person refutes accusation no one was making, first person's allies say, "see?"

It doesn't wash, John Halpin.
Posted by Scelata at 09:40 No comments:

Neither Hillary Nor Donald Likely To Have Been At Mass This Morning, But...

I try to read the Mass lectionary before I attend, sometimes several days, even a week ahead, sometimes my resolve falls through the cracks.
I've been a bit scattered lately, hurricane, laziness, family obligations... I can always find an excuse, not always for what I've done, but certainly for what I've failed to do.

Anyway, hadn't noticed this, but pretty sure I'm not the only one who boggled at the Gospel today


Be on your guard against the yeast of the Pharisees – that is, their hypocrisy. Everything that is now covered will be uncovered, and everything now hidden will be made clear. For this reason, whatever you have said in the dark will be heard in the daylight, and what you have whispered in hidden places will be proclaimed on the housetops.

Haven't decided who I'm voting for yet, honestly, but this picture made me laugh...

I've always been fond of the "dead stare."
Teachers and Moms can use it to terrifying effect. TV cops deploy it in interrogations.

It's as if she's asking us, telepathically, 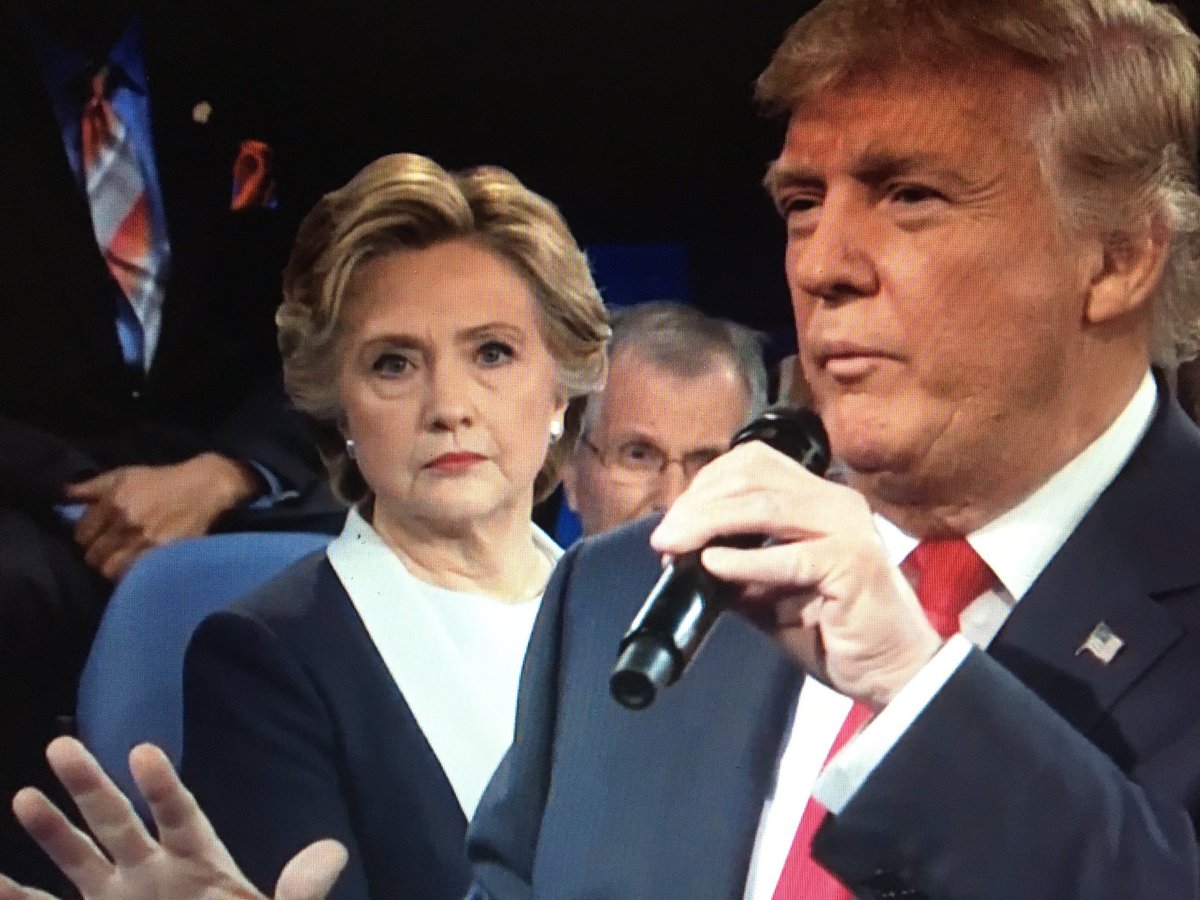 New Cardinals Announced... Am I the Only One Who Sees This?

At the next consistory there will be 17 new "Princes" of the Church.

The youngest is Dieudonné Nzapalainga of Bangui.

Anyone else notice a resemblance? 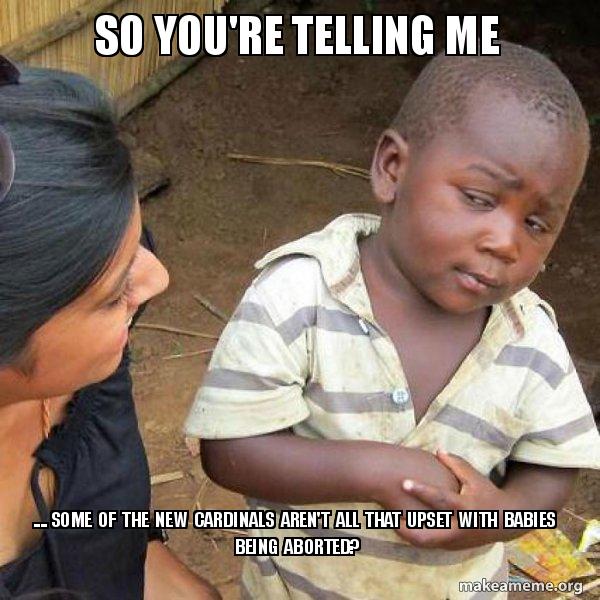 "We did nothing wrong, but we'll do things differently next time," say

(Upfront, that is not an actual quote from any of the miscreants in this story, it is a characterization of the CYA of the miscreants in this story.)
About 60 miles southwest of Orlando, a massive sinkhole recently opened up near Mosaic phosphate processing plant in Polk County, allowing an estimated 215 million of gallons of contaminated waste to seep into the Florida soil and aquifer.
The company and government officials have kept the contamination, (not the sinkhole because it's um... HUGE,)  secret from the public, the press, and worst of all from nearby residents who live off well-water  for several weeks, as millions of gallons of plant waste and byproduct ran through a 45-foot-wide hole into the earth.
But it's okay, because it's not VERY radioactive, and the governor doesn't own SO much of the companies stock, and only once has the company  paid TEN THOUSAND DOLLARS at a county fair for a cake made by the child of the agriculture commissioner.

So trust'em.
They didn't do anything wrong and they won't do it again, even though it wasn't wrong, and even if it was that was the last time, and....

Well, I guess the "and" is that  rural resident of Florida have about the same status as inner-city folks in Flint.