So much for purgatory....

Why are so many priests fearful of even the mention of it, and the souls there?

The men and women who followed the teachings of Jesus
...successfully ... were honored by the Church by being canonized
and named Saints. These we honor on November 1.

Many others, however, lived simple and quiet lives, sometimes
falling, but always getting up. They recognized the
love of God for them, and came back for forgiveness, reconciliation
and strength: "These are the ones who have
survived the time of great distress; they have washed their
robes and made them white in the Blood of the Lamb."
These men, women and children are recognized on November
2, when we commemorate all the faithful departed.

What, you didn't know there was a connection?

“When I use a word,” [he] said, in rather a scornful tone, “it means just what I choose it to mean—neither more nor less.”

Good article, though, good people.
Posted by Scelata at 09:49 No comments:

Would it be unkind to call the reasoning in this essay and some of the posted responses "sophistry"?
I've never been certain just how pejorative that word is...does it imply deliberate misdirects? ( I have no reason to question the original author's goodwill and sincerity.)

You are at the wedding of a beloved family member or friend, which is taking place at a Lutheran church. You gladly accepted the invitation to celebrate this happy day with the bride and groom. But then there is a call to come to the table of the Lord’s Supper, to receive communion. This is the awkward moment you knew was coming. Can you, and should you, a practicing Catholic, accept the invitation?

According to the Code of Canon Law, receiving communion in a Protestant church is generally not permissible. According to canon 844, “Catholic ministers may licitly administer the sacraments to Catholic members of the Christian faithful only and, likewise, the latter may licitly receive the sacraments only from Catholic ministers.” The key term here is licit. If a Catholic receives communion from a Protestant minister, it is generally considered “illicit” or unlawful.

The reason for the Catholic Church’s general rule against sharing in the Eucharist with other churches is that a person can only be in full communion with one church.

Lutheranism isn't another"church" in the sense it should be used here, is it?

The kicker for me was that a respondent reminds us that not permitting inter-communion violates one of the most profoundly embraced tenets of our Catholic theology, you know, as he tells us is spelled out in the CCC.

Oh, wait.... I mean he tells us it's spelled out in the song lyrics of, um... someone who, unhappily, does not hold to all that the Catholic Church believes and teaches.

Because isn't that where we get our most authoritative doctrinal citations?

Lex cantandi, lex credendi...
Posted by Scelata at 09:20 No comments:

Don't get me wrong, I love Halloween, mocking the evil one, acknowledging the thinnest of membranes 'twixt this world and the next, being slightly scared in an entertaining way, seeing children, (especially tiny one,) dressed absurdly, even boggling at grotesque masks (and we won't even go into chocolate....)

But this morning's paper had a photo of a veterinarian who goes all out decorating her clinic for Halloween, and the object featured in the photo was a life-sized, rubber "legless man being gnawed by rats," his face contorted in agony.

She loves animal, one assumes, (an that is laudable,) so I wonder how amused such a professional would be by a life-sized, rubber, legless, oh, I dunno, golden retriever being gnawed by rats, with its face contorted in agony.

I suspect she would be disgusted by such a depiction of suffering, don't you?

Because as I said, she probably loves animals....
Posted by Scelata at 07:11 2 comments:

Labels: Life as we know it, Life Issues

Oh, for the love of pete, next these old sticks-in-the-mud are going to say that "God Bless America" doesn't suit...
Posted by Scelata at 12:38 2 comments:

An intriguing conversion story, a goth's encounter with the Church, via Christina Helena, (why am I discovering this kind of site when I am in no position to explore them for more than a moment at a time? Oh, well.... bring us this day our daily internet access...)

I have always been quite a counterculturalist. Celebrating life off the beaten path, finding my own trends and rejecting the dominant, materialist, fame-obsessed lifestyle. This is the story of a nerdy goth girl who is Catholic...or how I managed to incorporate Catholic into being nerdy goth. Whatever way you want to see it....
[I] vowed one winter in college to learn Latin- because it sounds cool. ... to hear Latin, ye shall go to church!
This is where encountering the past helps to realize the future. In a drafty cathedral unable to understand anything the minister said, I found God. He was there, hidden in …hoc est corpus meum and laid bare by those very words. I don’t mean to get weird, but it was amazing. My disdain for mainstream culture, unhappiness with hedonism and ancient longing finally found balance! And anyone who thinks goth and Catholic don’t mix ask yourself: Where does death find such beauty and light engage the darkness more than in the spilt blood of One Saving Victim?... [emphasis added]
I knew who Jesus was, I knew he died for our sins but I did not know he came down to be present in every Eucharist!
When I saw that priest lift the wafer and say "hoc est corpus meum" I felt something special was going on. There was a "shininess" to the air. That was the first time I felt...Him!

This reminded me that Abby bowls with, and occasionally seem to live with, nuns, (yeah, I watch WAAAAAAAAAAAY too much TV.) 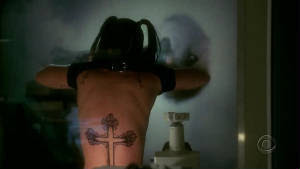 The Mass of Pope Pourri

Himself sent me a link to the tri-fold being distributed at my former (though still "official", I suppose, that's where the "permanent record" resides,) parish in furtherance of getting the new translation ingrained.

The music!
Oh, the music!

But Himself had not noticed, this is not the parish's doing, but the diocese's (no surprise there.) That diocese! That diocese....

The Gloria is responsorial, a re-do of a bouncy pop-ish, (not "popish",) thing, and NOT one we had ever used in that parish, nor, strangely, one I had ever heard sung in any nearby parishes, or diocesan events.
Why?

And there are two Sanctus settings on offer, (this is the only piece with options.) Weird.

Ironically, the "Amen" is a too-long setting, also a re-do, nearly identical to the one I had whipped up and tried to foster the use of in the parish years ago in my nearly fruitless attempts to wean them off pieces of the ordinary that did not respect the integrity of the text of the Mass.
In other words, the composer has revised his work, not because the new translation demanded it but because he had never set it properly in the first place.

Father had hated it, and really let me have it when I tried to do them he saw no reason, so I had simply stopped programming the errant "Amen." Wonder if he'll object to it now.....

I had a hard time getting him to sing parts of another Mass setting properly, because it DID have the correct words, to the acclamations, for instance, and he simply "knew" them wrong from that drekky setting.

I don't see the music changing for the better in that diocese any time soon.

And it's as if my time in harness at the parish was nothing...
Posted by Scelata at 07:06 2 comments: