Can Just Anyone Claim to Be an Ethicist?

The NYTimes word-putter-together currently so described seems to be a sports and arts journalist?

In any case, he certainly seems a step-up from the last one whom I read with any frequency, who was a comic, or something of the sort, and fairly ignorant on most issues, and very inconsistent in the application of his "principles."

The column today addresses a subject that is kinda ironic for the Times to address, at least from the point of view of a Roman Catholic.

It deals with the credentials one needs for being a weather forecaster, (since there is little expectation that that anyone is usually, or even often correct, regardless of advanced degrees in meteorology, the question seems moot, but I digress.)

I don't recall who, but some blogger, in answer to the Times' insistence on humoring people who were not to proclaim themselves "Roman Catholic priests" despite the Roman Catholic Church's holding that these presbyteral wannabes were no such thing, wrote a very funny piece claiming his identity as a New York TImes journalist, despite the Times' refusal to pay him a salary, or give him a byline.

'Cause isn't that how it works?

And me?
I'm the Queen of Romania,. 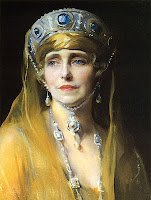 Children of Men, anyone?

One knew just how prescient P.D.James was when every second person one encountered seemed to have a "teacup" animal, dressed, carried, and spoken to as if a child.

Zenit has a piece on the demographic cliff toward which we are hurtling. Hopefully Jonathon Last's new book will get people talking, and thinking.
And praying?


"A country without children is a nation without a future." According to a recent post on the Demography Matters blog, this was a comment by Portuguese President Aníbal Cavaco Silva, referring to his country’s low birth rate.

The post noted that the number of births in Portugal has been below the level needed to replace the current population since the early 80s. Moreover, the stagnating economy is leading younger Portuguese to emigrate in search of jobs, keeping the youth unemployment rate to only 38.3%, quite a bit better than the situation in neighboring Spain, at over 55%.
The economy is still shrinking, government and private sector debt is enormous, and, as the blog post commented, “So with less people working and paying into the welfare system, less GDP, and huge debts the numbers simply don’t add up.”
Portugal is by no means alone in struggling to cope with an aging population.
“Britain is ‘woefully under-prepared’ to cope with an expected explosion of older people and ministers need to respond by raising the retirement age and tackle the costs by reviewing pensioner benefits, a House of Lords inquiry concluded,” observed a March 14 article in Britain’s newspaper the Guardian.
It said that from 2010 to 2030 there is expected to be a 50% increase in people aged 65 and over and that Britain will need to make major changes in order to cope with this change.
The article stemmed from a report by a group of peers of the House of Lords. The “Select Committee on Public Service and Demographic Change - First Report Ready for Ageing?”
Living for longer is something to be celebrated, the report noted. This comes, however, with risks and costs and the fact that people can outlive their pensions and savings.
The report made a number of detailed proposals on how to deal with the growing number of elderly people and the economic pressures this will cause.
The problem is Europe-wide. On March 26 Eurostat, the statistical agency for the European Union, published demographic data for 2012. At the start of 2012 the number of persons aged 65 or over had grown to 18% of the total population, compared to 14% in 1992.

Labels: Life as we know it, Life Issues

Another First for Francis?

I realize the election of the new Holy Father is very old news, but I've been occupied, so...

Is he not the first Pontiff to have been ordained in the Novus Ordo, the first to have never celebrated  what we now call the Extraordinary Form?

Or would his seminary training in Argentina have included the "old Mass"?
Posted by Scelata at 10:47 No comments:

If only the Church had some sacred language that belonged equally to all of us...

This morning Mass was said by a very sick man.
I appreciate that so much.
Father had to drag himself out of his sick-bed because the arranged substitute was in even worse shape.

Father told us the Bishop would certainly send someone had he asked, but it is always someone from Honduras, or Kenya, or Haiti, or Sri Lanka, and then the parishioners, (who, it must be said, are generally elderly and don't hear very well under the best circumstances,) complain and complain and complain about the visiting priests' command of English.

If only Mother Church, in Her wisdom, had thought to designate some sacred language that belonged equally to all of us, that all priests could learn, something with open, easily pronounced vowels, few difficult consonant blends, and actually, when you get down to it, a fairly limited vocabulary...

Did I hear wrong,  am I mistaken about the era in which the season permiere is taking place -- or did a Catholic charactger on Mad Man use "and also with you," as a snarky retort at least a couple years before that mistranslation became part of the Mass in English?

(Although good catch,Weiner, we really do do that... There was the same little thrill I got the first time I heard someon correct the pronunciation of my last name in a Cagney movie.)
Posted by Scelata at 13:44 No comments: