I was looking forward to the solemnity, this, Christ the King, and Corpus Christi really speak to me, orations, propers and readings. The celebrant is one who heeds the calendar and ordo, so, unwontedly, we actually spoke the gloria, the credo, even heard a small homily, on the history of the feast.
This was actually a touch remarkable, as there was some preaching on the beauty of devotions, and this from a priest who from time to time betrays a kind of fond contempt for anything that smacks of Old Churchy Things.
A few weeks ago I worshipped at a parish that hears Confession before Sunday Mass, "time permitting," and I do like to make confession somewhere other than my home parish. There was a very long line, it moved in fits and starts, and just as I made to enter "The Box" for my turn, the priest exited, "sorry, MASS!" and rushed past me.
So, they were having two morning Masses so presits were hanging around after the first and I availed myself of confession. I had the list of things I had wanted to talk about a few weeks ago niggling at me - nothing serious, nothing too specific, my poenitentia interrupta hadn't been keeping me up nights or anything.
Among my sins were the real anger i feel stirring at the way people behave in Church, not just in Sunday Mass where there may be those who are only there out of a sense of obligation, but weekdays, Lenten devotions, hanging around after Mass, that sort of thing.
Well, the good father didn't give me a penance, per se, he told me to just sit before the tabernacle and let the Lord's healing "wash" over me.

"Healing"??!???  I don't need no stinkin' healing, I thought quietly to myself, I need penance! punishment!
And instantly, from my reaction I figured, oops! guess I do....

So I took myself out to the nave and sat.
And sat.
There was Jesus. There was my Lord. There was the Sanctissimus.There was God.
So I sat there and just tried to love Him, and feel His love for me.
And it was workin' pretty good.

And as the Mass-goers trickled in for the 9:30, the chattering began. And it got louder, and louder. I thought the Pick-a-Little ladies were practicing behind me, the noise from what sounded like an Elks' smoker grew and grew over to the side with occasional loud guffaws, people were trading recipes and photos of their grand-kids, and disappointment in their teams scores in front of me.

And I wasn't feeling any love for them, and I was thinking, see, Father? I was right to be angry, that was a dumb thing for you to tell me to do, you should have known how noisy it wold be, I should come back and do this later, these people are awful, I can't stand them, what is WRONG with them, I hate it, can't they even --

And then I thought about Chesterton.

And then I thought about trying to love them.


Most sweet Jesus, whose overflowing charity for men is requited by so much forgetfulness, negligence and contempt, behold us me prostrate before Thee, eager to repair by a special act of homage the cruel indifference and injuries to which Thy loving Heart is everywhere here, in this very seat, subject.
Mindful, alas! that we our I myselfves have had a the lion's share in such great indignities, which we I now deplore from the depths of our my hearts, we I humbly ask Thy pardon and declare our my readiness to atone by voluntary expiation, not only for our my own personal offenses, but also for the sins of those, who, straying probably not as far as I from the path of salvation, refuse in their obstinate infidelity neglect? stress? thoughtlessness? (I'm in no position to throw stones,) to follow Thee, their Shepherd and Leader, or, renouncing the promises of their baptism, have cast off the sweet yoke of Thy law. 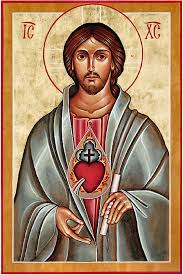